Northern People of the Year: The Inuit from Nunavut

Riddu Riđđu audience will meet artists and culture bearers who work within culture, handicrafts, music and politics in Nunavut. They are all important voices contributing to the story about the Inuit from Nunavut and the story about our community as indigenous people from the North. Katajjaq/throat singing and drum dance will be significant at this year’s Riddu Riđđu.

The Northern People of the year program is supported by: 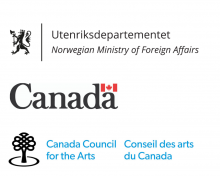